Named one of the Ten Best Books of 2019 by the Wall Street Journal. Now available in paperback!

Erik Satie begins life with every possible advantage. But after the dual blows of his mother’s death and his father’s breakdown upend his childhood, Erik and his younger siblings–Louise and Conrad–are scattered. Later, as an ambitious young composer, Erik flings himself into the Parisian art scene, aiming for greatness but achieving only notoriety.

As the years, then decades, pass, he alienates those in his circle as often as he inspires them, lashing out at friends and lovers like Claude Debussy and Suzanne Valadon. Only Louise and Conrad are steadfast allies. Together they strive to maintain their faith in their brother’s talent and hold fast to the badly frayed threads of family. But in a journey that will take her from Normandy to Paris to Argentina, Louise is rocked by a severe loss that ultimately forces her into a reckoning with how Erik–obsessed with his art and hungry for fame–will never be the brother she’s wished for.

With her buoyant, vivid reimagination of an iconic artist’s eventful life, Caitlin Horrocks has written a captivating and ceaselessly entertaining novel about the tenacious bonds of family and the costs of greatness, both to ourselves and to those we love.

*If you’d like a personalized signed copy of the book, you can use the comment box on the Schuler Books order page to explain that you’d like it signed, and whom I should make it out to. I’ll be stopping by the store to sign these, and would love to send you one. 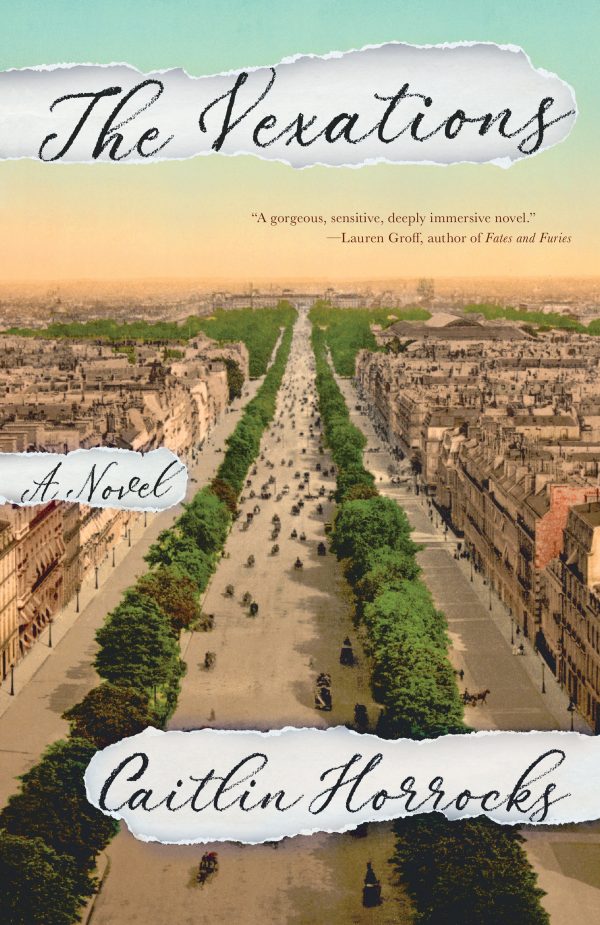 Praise for The Vexations

“Marvelous . . . Was [Erik Satie] a prophet or a prankster? To its credit, Ms. Horrocks’s novel doesn’t venture an answer. Instead, it wonderfully embellishes the world through which Satie wandered like some kind of marooned alien visitor.”―Sam Sacks, Wall Street Journal

“A heartbreakingly beautiful novel about the sacrifices people make for what they hold dear.” –STARRED review, Library Journal

“The Vexations builds to a devastating conclusion, but it’s worth the pain for this unusual, quietly beautiful meditation on the work and strife behind art that has endured for generations.”―Bethanne Patrick, Washington Post

“Affecting . . . An engrossing debut . . . Horrocks writes enchantingly about the bohemian life of artists in Montmartre . . . Her language is lyrical and captivating . . . The novel reads like a finely composed piece of music, swiftly interweaving winsome sentences with period details and the characters who lived them. From the use of a pneumatic tube messaging system under the city to the introduction of the telephone, The Vexations presents itself as a window into a textured past made real and tangible for the reader . . . What’s most extraordinary about The Vexations is the writing itself. There is the risk with historical fiction that the research will be heavy-handed, to the dilution of story. Horrocks’s vast knowledge of French history and classical music is on display, but the bounty of information never overwhelms . . . The multiple points of view offer the reader perspectives and arcs another novel might otherwise deem too minor to allow; each character is compelling enough in their own right. In using various narrations, Horrocks shines a brighter light on la Belle Époque, showing the period was composed of people beyond the already established artists . . . This narrated mosaic illuminates how Satie’s ambitions were shaped by or existed alongside those of his family and friends . . . The novel’s ending, narrated by [Satie’s sister] Louise, is what makes The Vexations as extraordinary as Erik himself. Louise closes by centering completely on his genius. Every sentence Horrocks writes is a stepping-stone to this apex, and satisfying to such a degree that the reader will have the urge to close the book and begin listening to Satie’s music.”―Rachel Duboff, Los Angeles Review of Books

“Horrocks’s opening chapters are deeply affecting in their portrayal of childhood grief and are also among the novel’s most vibrant, evoking the salt air and earthy people of the Norman coast while shifting between characters…Horrocks shines as she renders the Montmartre demimonde in Day-Glo colors, as provocative as a Toulouse-Lautrec canvas. Deftly she plumbs the singular zeal–and occasional neuroses–that drive artists toward achievement as well as self-destruction…Cameos from Jean Cocteau and Claude Debussy add sparkle…The Vexations explores grand themes with grace and conviction.”―Hamilton Caine, Minneapolis Star Tribune

“A beguiling debut . . . As a title, The Vexations befits a novel about the uncompromising genius of a man who by the end of his life appears to have alienated everyone he cared about. However, if this makes it sound like Satie is Horrocks’s unique focus that would be misleading. The Vexations contains a richly arranged cast of characters, all of whom rub up against each other in the streets, cabarets, and cafés of Montmartre, Paris, on the cusp of the twentieth century. Most vivid among these are Satie’s younger sister, Louise, and brother, Conrad . . . Horrocks’s gliding prose scatters grace notes on every page. There is also a questing meditation on the nature of genius, expressed by Louise in her role as a teacher . . . Horrocks’s version of Satie, despite or perhaps because of his many failings, emerges as a strangely heroic figure.”―Tobias Grey, Financial Times

“Horrocks paints an atmospheric portrait of bohemian Paris and a poignant one of Satie and his avant-garde circle, who “lived in the yet: not now, but soon” when their art would be recognized…Finely written and deeply empathetic, a powerful portrait of artistic commitment and emotional frustration.”―Kirkus

“A finally wrought, sensitive novel about family and genius, and the toll that genius exacts on family in pursuit of great art.” ―The Millions

“A beautifully melancholic tone permeates this finely written debut novel from acclaimed short story author Horrocks. More than biographical fiction about French avant-garde composer Erik Satie (1866-1925), it’s a multiperspective saga about the Satie siblings and their circle, and how their lives touched and diverged over decades. … Erik’s story looks beyond the “tortured genius” stereotype to something more nuanced and real, while both Louise and painter Suzanne Valadon, Erik’s one-time companion, personify different aspects of being a woman alone. The bleakness of the themes of loneliness, family separation, and thwarted expectations sits in counterpoise to several couples’ deep love and the creativity that produces innovative art. ―Booklist

“Horrocks’s vivid, hard-edged debut about French composer Erik Satie focuses on his erratic career, difficult personality, and dysfunctional family… a portrait of avant-garde turn-of-the-century Paris that proves art isn’t easy and neither are artists. Horrocks shines while envisioning Erik scoring a silent film, debuting a masterpiece, or being released from jail (where he was held for defaming a reviewer) so he can complete a commission. Horrocks’s description of Satie’s music is also apt for her noteworthy novel: slow, spare, and at its best finely filigreed.” –Publishers Weekly

“I’ve rarely seen a debut as buoyant and inspired as Caitlin Horrocks’s The Vexations. In language both champagne-clear and effortlessly lively, Horrocks plumbs the world of Erik Satie through those closest to him, the siblings, friends, and lovers who struggle to support and understand him even as his obsessions isolate and score him deeper than anyone can reach. As much about the vexations and impossibilities of life itself as about Satie’s singular genius, this is a dazzling first novel from a writer to watch.”        —Paula McLain, New York Times bestselling author of The Paris Wife and Love and Ruin

“I’ve loved Caitlin Horrocks’s work for a long time, so I am not surprised–though I am overjoyed–to find that she has written a gorgeous, sensitive, deeply immersive novel in The Vexations. You’ll never hear the music of Erik Satie again without diving back into the layers of genius, torment, eccentricity, abandonment, and profound sadness that Horrocks so masterfully evokes in this beautiful book.” ―Lauren Groff, New York Times bestselling author of Fates and Furies and Florida

“What a fabulous, original novel The Vexations is. Its unflinching honesty about an artistic world notable for both heart and heartlessness has given us a haunting, indelible story.” ―Joan Silber, author of the National Book Critics Circle Award winner Improvement

“Genius blazes in this gorgeous and breathtakingly assured novel—sometimes center-stage, sometimes in a corner—but there are no satellites: seldom have I read a book about art that refuses so staunchly to treat any life as minor. The Vexations is a rare, engrossing, humane achievement.” – Garth Greenwell, author of National Book Award nominee What Belongs to You

“The Vexations does what the best historical fiction must: it takes us beyond biography to the secret intimacies that make up a life. We’re granted access not just to the full and heartbreaking life of Erik Satie, but to a range of vibrant, deeply human characters—his wounded sister, Louise; his dutiful brother, Conrad; and the visionary artists in his circle at the Chat Noir. Among these is a young poet named Philippe, whose work Satie sets to the piano, though Satie’s “arrangements didn’t highlight his poetry so much as make it strange.” In this ambitious, surprising, and immensely moving novel, Caitlin Horrocks does the same for the music of Erik Satie, making it strange, making it new.” –Eleanor Henderson, New York Times bestselling author of Ten Thousand Saints